Welcome to Malaysia, this is Johnson your local tour guide for JohnsonMalaysia.com. Today I’m introducing one of the Tin mine city nicknamed ‘city of millionaires’. Indeed, there were and are millionaires here. They in the pass strike a big fortune in the end 1800s and early 1900s. Tin price when rocketed high seems every tin owners strike jackpot lottery tickets.

Today, many Kuala Lumpur tycoon’s grandfather had their glorious days in Ipoh one of them is the owner of the Sunway group of companies. Ipoh culturally closely related to with Malay land owners, Chinese Hakka, Indian money lender each made important contributions. This has made them to buy valuable items. As time when by Ipoh is not as it used to be since the London Tin exchange collapsed. Now the items of the pass have become collectors items. My dad Mr. Sisrajah was a coin collector as I recall my childhood days he had a huge collection of coins. 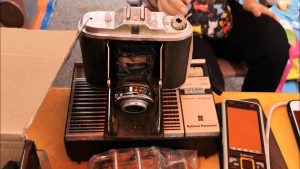 Pasar Karat means rusty or rusticated market rest assure this is aren’t any junk, but high value to the eyes that sees the value in them.  My first stop is Mr Robert an 30 years’ experience metal Antique trader. Watch the video to see his Japanese Dutsun 120Y if I’m not mistaken. It looks like going to collapse. He is a friendly chap.

As I was talking to him a Chinese man (ah Keong nickname), I believe Ah Keong is a collector was keen on an Old Cast Iron Pot. Robert told Ah Keong saw the item and went on but return after an hour realising the value of this rare pot, it was tagged at RM 500.00. Since I’m not a collector, I may not want to invest on that much for an old pot. Some of my friends willing to buy a T shirt for RM1500.00 collector items. I guess this a part I’m not familiar with. 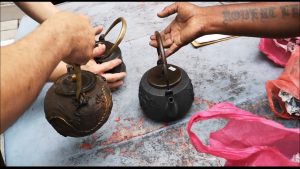 Then Robert showed some of the WW2 items one of it was a Bonnet / Knife from 1942 intact with its cover. WW2 Japanese Samurai I wonder how many head was taken by this sword. There many to say, but I recommend you book a tour with JohnsonMalaysia.com for Ipoh which in general well known for food. Many Singaporean come to taste local Dim Sum, Tauge Chicken. 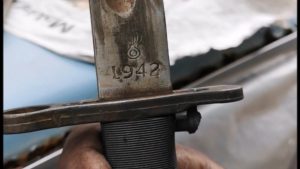 Keris is an import weapon in the Malay culture, it is equal to a soul of the carrier or owner. I met with a seller hear a fine gentle trading wonderful item had a collection of Keris of Luk 3, 5 and 9. This Keris in the Malay world believe to have mystical powers. He also was selling an item that really interested me a bicycle lamp using Carbide gas as fuel. Beside that old telephone, Vintage Trumpet, Horn Gramophone record player. Vintage Telephone. Etc 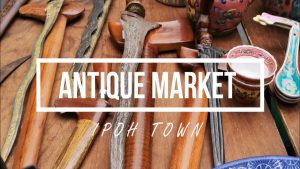 , hence they allow to use other metals and precious / semiprecious stones. I met an Indian Muslim who was making a ring embedded with stone, If you a vintage watch collector there many here too. 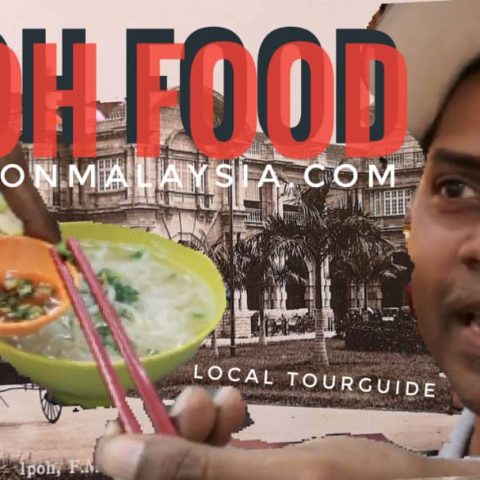